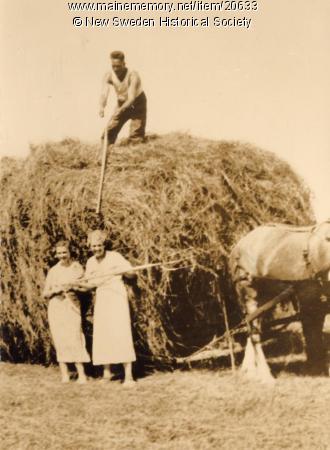 BIW Legacy Vault, Bath Iron Works, an "archive of photographs, plans and ephemera that chronicles our contribution to American shipbuilding".

Sanborn Maps: Maine, 1867-1970
Available both online and in microfilm, the Sanborn Insurance Company's maps from the 19th century depict homes, businesses, farm fields and other features of towns.

Documentary history of the state of Maine (Some volumes available online from HathiTrust.)
Published by the Maine Historical Society, aided by appropriations from the state, 1869-1916.

Historical Statistics of the United States.
Comprehensive, searchable collection of statistics, including 37,000+ data sets that can be downloaded. A historical supplement to the Statistical Abstract of the United States. A great place to start looking for data. Footnotes to tables lead you to more detailed or more current data. The introduction to each section provides a helpful summary of major sources. Previous editions are available from the Census Bureau, HathiTrust, and elsewhere online and in print.

Public Documents of the State of Maine, 1840-1940
Governor's message and executive agency reports--Agriculture, Health, Transportation, etc.
To identify and locate these documents, use our guide on Maine State Documents.

Maine Town Annual Reports
The Library has a collection of paper annual Maine town reports (town government's accounting to the taxpayers of the spending of tax money) in the Govt Doc Maine collection. Some date from as early as 1846. The University of Maine at Orono has digitized a portion of the Maine town reports. Both the Library's and UMO's collections are incomplete. Check CBBcat, MaineCat, and Maine Town Documents online.

United States Commission of Fish and Fisheries, Spencer F. Baird, Commissioner. The fisheries and fishery industries of the United States, prepared through the cooperation of the Commissioner of Fisheries and the Superintendent of the Tenth Census by George Brown Goode, Assistant Secretary of the Smithsonian Institution and a staff of associates. 1884-1887. Available online via U.S. Congressional Serial Set and via HathiTrust.

Dept. of Commerce, Bureau of the Fisheries. Fishing grounds of the Gulf of Maine. Walter H. Rich, Appendix III to the Report of the U.S. Commissioner of Fisheries for 1929. print; via HathiTrust. Republished in 1983 as a Maine state document under the same title: print.

See also How to Find Maine Documents at Bowdoin College, Maine State Documents, and Finding Aids for the Public Documents Series (Maine) in this guide.